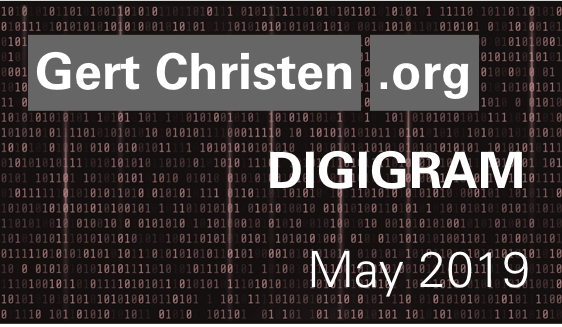 I get asked almost every single day: “What is Silicon Valley’s hottest startup, which technology or company up and coming, and which the newest trend, fashion, innovation, gadget, rumor, or entrepreneur?” And what my opinion is about it. And whether I can make an introduction please. And whether I can do x to help z.

I love this and am always happy to help. But why wait until you ask? Why not share proactively with you?

Yes, and now I decided to go one step further: Et voilà, here is the first edition of my newsletter, my digital telegram – “digigram” – from Silicon Valley. I will write on what I think are hot topics in technology and the Silicon Valley community, list my personal Silicon Valley tops and flops, and about events I plan to attend.

I hope that this will not remain a one way street, but rather that you and I can start an interactive dialogue. Today I am making the first step, and I hope you like it.

I thank you for your reactions, thoughts, feedback, etc. And for your wishes of what YOU want me to look into.

Hot Technology: Artificial Intelligence, the answer for “everything?”

The answer to the ultimate question about life, the universe and everything is 42. At least according to the Hitchhiker’s Guide to the Galaxy, in which it takes a supercomputer 7¼ million years to compute the answer.

What does this have to do with AI? AI could probably do this faster, much faster, in just 7 ¼ years perhaps. Not better, but faster.

We are witnessing a completely new way of problem solving: Computation at a speed so fast that the amount of data almost doesn’t matter anymore. This impresses me very much and that is why I am naming AI the hottest technology today.

It is incredible how AI is enabling the finding of answers to previously unanswerable questions because of the high speed of doing analysis: Not better but faster. NVIDIA has a demo running at their headquarters in Santa Clara where flowers on photographs are being identified. They can speed up the process by adding more and more processors until the human eye cannot even recognize the images anymore: Not better than a botanist, but millions of times faster.

I understand that this is the current state of the art. And I am fine with this because it allows the automation of solving many problems: Think cancer images instead of flowers. AI can automatically detect the majority of the images where there the patient has no cancer. And a real doctor only has to look at the no doubt low percentage of scans that are dubious. This would increase the quality of work for the expensively trained doctors by a lot! Think inspections of weldings or elevator cables or protective walls of nuclear power plants – the same thing applies. Great news for both productivity and for workers’ health.

The pattern is always the same: Train algorithms on data and then let it do the analysis fast and faster. It’s a tool. And I am fine with this.

It’s not the algorithms that pose the problem: It’s what problem they are being trained that may become a problem. It’s an ethical question at the end of the day. I for instance completely disagree with the application of AI by the Chinese government to identify faces captured by video cameras and to track persons or to publicly shame persons for undesirable behavior such as jaywalking – I am not fine with this. It is unethical because the people were never asked for permission to share their identities in public. However, it will allow the Chinese to gather more data for algorithm training on that anybody else. And as a consequence, China might develop the best AI in the world. But millions of Chinese will pay for this AI with their involuntary disclosure of their personal identity. I am not fine with this and I hope many buyers of AI will think the same way.

We must be careful. We must be critical. Autocratic regimes and free-ranging corporations have no scruples. AI can become a terrible tool in their hands. Society has yet to hold a discourse about AI, what it may be used for and what rules and regulations it should be subject to.

In the meantime, there are plenty of large problems out there for AI to solve, those that involve the automating of analysis at a million times the speed of today. Let’s solve these.

Silicon Valley: All is well. Is it really? Change is coming.

So much success, so much light: Silicon Valley might “produce” as many as 19 IPOs in 2019. Oh, it’s the promise of the traditional Silicon Valley startup culture come true: Where the end justifies the means and the winner takes it all. Really? Not really anymore, because more and more people object and start speaking up. A very healthy movement.

I admit that I didn’t pay much attention when I heard of cases of startup culture going overboard: Less women founders than men – of course, same thing all over the world, going to take another generation to fix. Hired less women than men and paid the women less – of course, less women study engineering and inexperienced managers falling for the salary trick. However, I did start paying attention after reading Susan Fowler’s blog entry about “one very strange year at Uber” with her account of how women were bullied and disadvantaged at Uber[. She shook me and many many others – thank you, Susan, for bringing this to light. But there’s more: In early 2018 thousands of Google employees went on strike to protest against their company developing AI for the US department of defense to automate the analysis of drone footage. More than 4000 Googlers signed a petition to terminate the contract, and Google’s management obliged.

Wow, tech workers blowing the whistle on abuse by their employer and directing how to use the products that they create?

This is new and very different from the traditional “ask for forgiveness later”-approach, where strong startup leaders such as Mark Zuckerberg @Facebook, Travis Kalanick @Uber and Elizabeth Holmes @Theranos forge ahead unhindered, plowing thru any obstacle and employees following blindly, keeping quiet in the hope to strike it rich.

Do we see the beginning of a new paradigm? Where tech workers are such a scarce resource in the corporate war for talent that they can dictate what goes and what doesn’t? Although shocked by the thought at first, I am now warming up to this thought: If the employees who create the intellectual capital that a company commercializes truly are “the most valued resource” of a company (a sentence printed in many, many, many company brochures and annual reports….), then they should have a seat at the table that decides on strategy including which markets to serve and which ones not.

What do you think? Answer this poll or comment and I will share the results of what the crowd of readers of this newsletter thinks.

Top of the month:

Congratulations Uber, Lyft and Zoom on your IPOs! And it looks like we can expect many more tech IPOs in 2019!

Flop of the month:

How low can you go, Facebook? You still haven’t learned that the old “only admit to what everybody knows anyway” does not work anymore. You are doomed because people don’t like you anymore and that is entirely because of you.

The month of June is HWZ University month again. Another two groups of HWZ’ Institute for Digital Business will visit Silicon Valley and I will show them around for a week. The goal is to provide them with impressions, connections and technologies to solve the digital transformation of their companies in Switzerland. Read the account of Tony Grgic who toured Silicon Valley with me in November 2018.