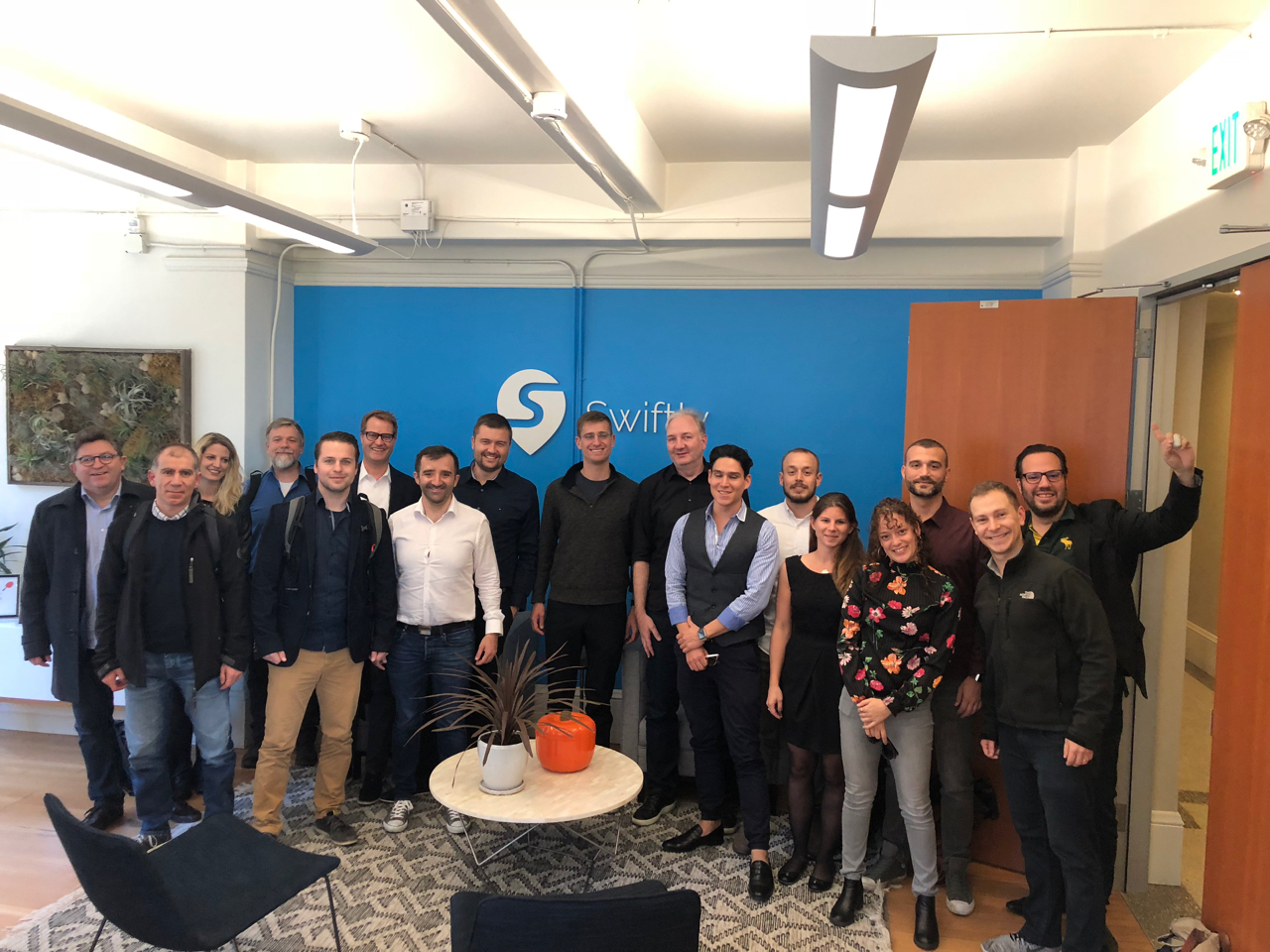 This article was first published as a LinkedIn article by Antonio Grgic on November 12, 2018. He condensed his personal learnings from a study tour to Silicon Valley organized by HWZ University of Applied Sciences Zurich. What follows is the English translation of the article with an introduction by Gert Christen who organized and led the study tour.

If you live in the San Francisco Bay Area you know the two types of buses shuttling people between San Francisco and Silicon Valley: Employee buses of the large tech companies on the one hand and chartered buses carrying visitors from all over the world to the same tech companies on the other. Each week there are hundreds of delegations from all over the world traveling around the Silicon Valley determined to learn its secrets. They fall into five categories:

I support Silicon Valley tours for the groups 1-4 above. A well-prepared tour thru Silicon Valley can be a clear value-add and enable unique insights as the article below illustrates. However, such a tour must have a clear purpose, the participants must prepare in advance and there must be a clear “what’s-in-it-for-me” for the Silicon Valley companies and institutions visited.

I spent a week in Silicon Valley as a part of my studies for a Master in Digital Leadership. I am happy to share my experiences and learnings.

Silicon Valley includes the geography of the City of San Francisco and the entire San Francisco Bay Area and counts roughly the same number of inhabitants as Switzerland. If Silicon Valley was its own country, its economy would be ranked one spot ahead of Switzerland. However, once we compare the available investment capital, Silicon Valley is very different: Silicon Valley invests 50 times more into entrepreneurial innovation than Switzerland. Major universities in Silicon Valley are Stanford and UC Berkeley whereas Switzerland is well represented with ETH Zurich and EPF Lausanne. Both regions have an excellent talent pool. The one thing that Switzerland (and to some extent the rest of Europe) are missing is the big venture rounds for the big steps forward. This has resulted in several Swiss startups being acquired by  large companies from Silicon Valley. Even though handsome sums are earned by the founders who sell out, these transactions do weaken the European innovation ecosystem as a whole. When we think of the large technology platforms that went global, they are almost all located in the USA or in China. SAP, Spotify and Zalando are few European platforms.

The following diagram shows the unbalance in the economics of global technology platforms between the USA, Asia and Europe (in German. The numbers indicate the most recent valuation dating from June 2018. Either valuation at the last financing round or the value at a stock exchange): 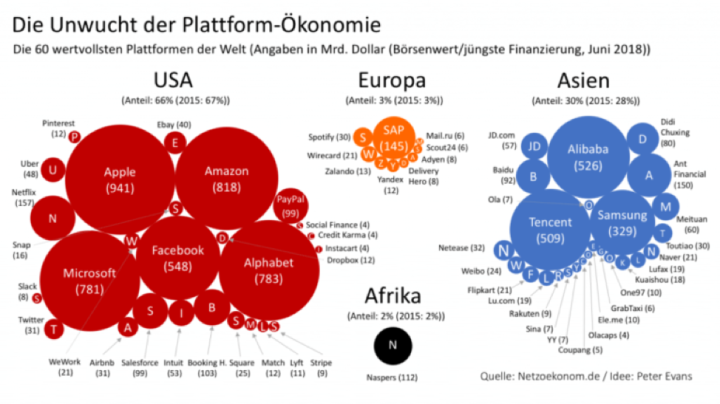 There is a strong difference in this area between Switzerland and the Silicon Valley. People in Silicon Valley want to achieve something big and pursue longterm visions. When we visited companies we noticed that the employees spoke very highly of their CEO. Silicon valley companies also clearly communicate to their shareholders that they don’t want to be measured in the classic way of quarterly reporting. Amazon, for example, states the following even on their career page:

Europe’s large enterprises were mostly founded during the age of industrialization and their markets have been well predictable and measurable. Even today most companies focus on the end of the current quarter. This way of working is impeding innovation. Which leads to the question how a more innovative enterprise should work. Stefan Petzov of the Swisscom Silicon Valley Outpost showed the perfect solution in the following slide. The system can only work if all parts of the puzzle are present: 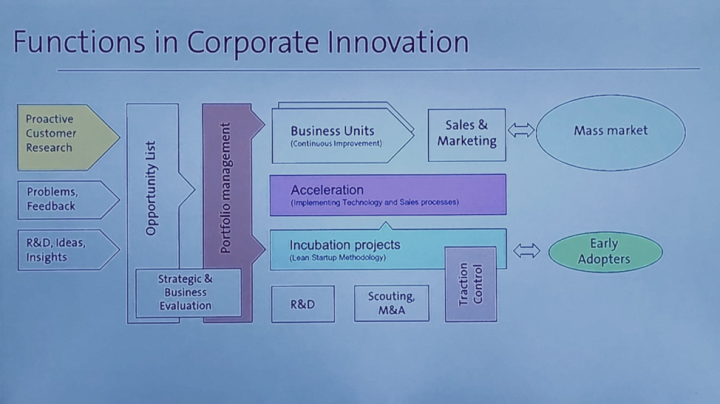 Go out into the market! Amazon first only sold books, Uber initially only offered a limousine service, Airbnb in the beginning only rented out a couch, etc.

We realized just how important the customer experience has become when we visited the Tesla factory: Everything is manufactured internally that directly influences the experience of customers, e.g. the steering wheel and the car seats.

We noticed that good cooperation is a key contributor to company success in Silicon Valley. The objective is to house as many employees as possible in the same location. NVIDIA demolished five separate buildings and replaced them with just one new one. The offices were moved to the edge of the building to promote the meeting and cooperating in the middle of the building, which everyone can reach easily. Even materials were chosen to support conversations. An excellent internal company restaurant in the middle of the building resulted in 70% of employees not eating out.

“AI” (Artificial Intelligence) is buzzword number 1. It seems that everything revolves around AI and large investments are made in this area. Silicon Valley is determined to beat China in this technology. Another sector with high activity seems to be Medtech. Voice was not mentioned very often, Blockchain every now and then. We saw numerous self-driving vehicles on San Francisco’s streets.

Amazon opened their first Amazon-Go store. You simply scan the QR Code in the App at the entrance and can then simply take products from the shelves and walk out of the store. Without stopping at a checkout or lines, seriously! What a customer experience: 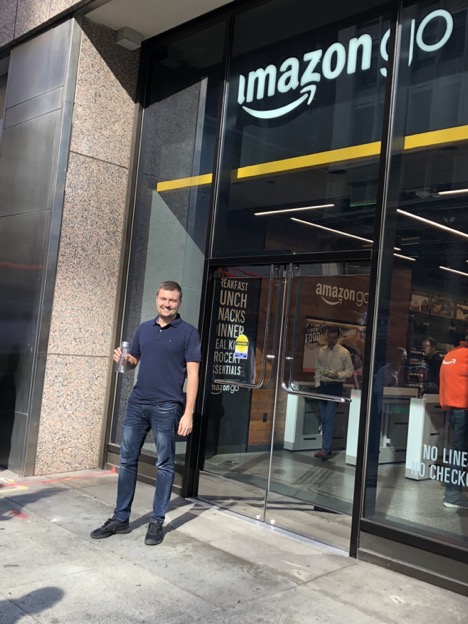 We were impressed by the level of openness and hospitality. We were always welcomed very politely and the meeting rooms were usually well stocked with coffee, drinks, fruit and snacks. Everyone listened attentively. As a result our meetings were different and it did not take a lot to achieve this. How often are we staring at our laptops or smartphones in meetings?

However, I would also like to mention that while everybody was very open and friendly, it was mostly on a superficial level. Our hosts fairly rapidly wanted to find out “what’s in it for me”. Nevertheless this openness and superficial curtesy leads to more cooperation because starting a conversation is easier and this leads to the uncovering of opportunities.

When walking thru the streets of San Francisco or taking the train in Palo Alto, you would never think that technology leaders such as Apple, Facebook, Google, Uber, Twitter, LinkedIn, Salesforce, Tesla, NVIDIA, Adobe etc (I could go on with many more…) are all located in this region. The public system seems to have stopped functioning quite a while ago. 8000 homeless live on the streets of San Francisco alone. The infrastructure is in a rather desolate condition. The large tech companies operate their own busses to bring employees from San Francisco to Silicon Valley and back to the city in the evening. Traffic jam is preprogrammed. 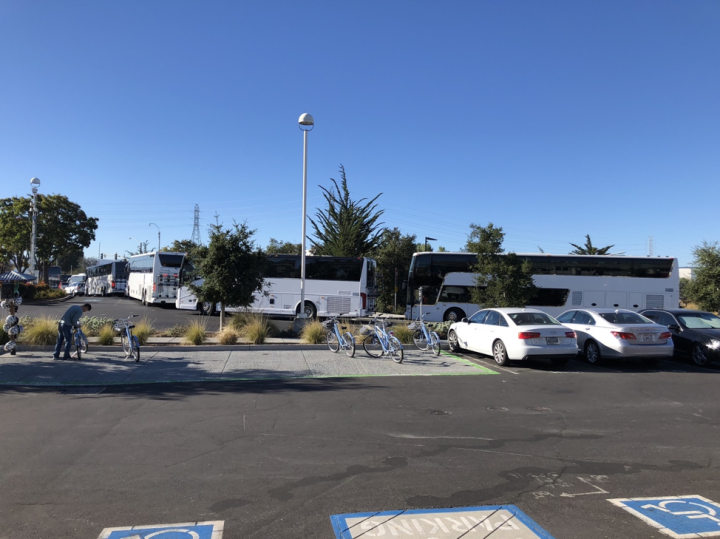 Image: A fleet of employee buses arrives at Facebook headquarters at 9am

Work-life balance is a topic that becomes more important in Europe. It does not seem to really exist in Silicon Valley, where up to 14 hours of working per day and 24/7 availability do not seem to be out of the ordinary. This WIRED article addresses the topic somewhat. We did not get concrete answers when broaching this topic, which seems to be another component of the Silicon Valley culture. 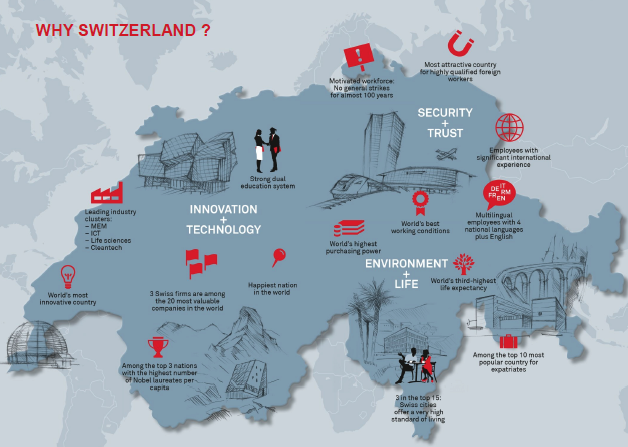 Author: Antonio Grgic, Head of Operations at Optimatis (Comparis Group) in Zurich, Switzerland. He can be reached at antonio.grgic@optimatis.ch.

Translation: Gert Christen, Innovation Strategist and Head of the Silicon Valley Outpost of HWZ University of Applied Sciences in San Francisco, USA. He can be reached at gert.christen@artecos.ch.

These are the official blog entries of each day of the study tour (at HWZ Digital):